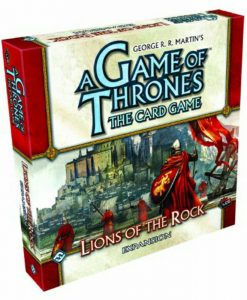 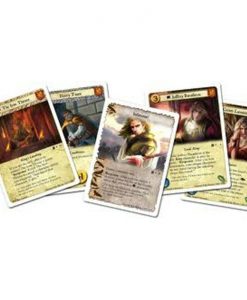 A Game of Thrones the Card Game: Lions of the Rock Deluxe Expansion LCG

Product Description
From their seat of power at Casterly Rock,
a seat nearly as powerful as the Iron Throne itself in wealth and influence, the
rich and powerful lords of House Lannister are raising the banners of war.
Beneath the golden lion on a crimson field as red as spilt blood ruthless lords,
devious ladies, cunning knights, and vast armies are forming to proclaim to
Westeros the words of House Lannister: “Hear Me Roar!”Lions of the Rock is the
sixth Deluxe Expansion for A Game of Thrones: The Card Game, featuring 165 cards
new to the LCG card pool â€“ three copies each of 55 unique cards â€“ that add
deck-building opportunities and strategic depth to your game.The cards included
in Lions of the Rock deepen the existing strengths of House Lannister, as well
as adding some new avenues of strategy to explore. Forming the core of Lions of
the Rock are the formidable members of the Lannister family: the ruthless
patriarch Tywin, the treacherous queen Cersei, the Kingslayer Jaime, and the
beguiling Tyrion. Each wields power as naturally as dragons breathe fire, backed
by the limitless wealth of Casterly Rock and the unbreakable will of House
Lannister’s honor and willingness to repay any debt in blood. As anyone in
Westeros will tell you â€“ a Lannister always pays his debts…In-game, each
Lannister represents a different approach to victory, around which entire decks
could be built, from Tyrion’s synergy with the Clansman trait, to Tywin’s
breathtaking seizure of power based on having lots of gold in play during
Dominance, to Cersei’s ability to claim power whenever you win intrigue
challenges (playing very well into the new The Power Behind the Throne agenda).
Working separately, the Lannisters are merely powerful. Working together, the
might of the Lannisters can become unstoppable.

The Lions of Casterly Rock have honored
their sigil colors of crimson and gold well through blood split and wealth
gained. Lions of the Rock focuses on the ambitious House Lannister their vast
resources and love of intrigue. It features new cards that include Clansmen
Tywin Lannister Bronn and new Lannister-specific devastating Events. Be careful
not to prick a lion?s pride…a Lannister always pays his debts. Lions of the
Rock is the sixth Deluxe Expansion for A Game of Thrones: The Card Game
featuring 165 cards new to the LCGÂ® card pool ? three copies each of 55 unique
cards ? that add deck-building opportunities and strategic depth to your
game.

Be the first to review “A Game of Thrones the Card Game: Lions of the Rock Deluxe Expansion (Living Card Game) – Ffg” Cancel reply