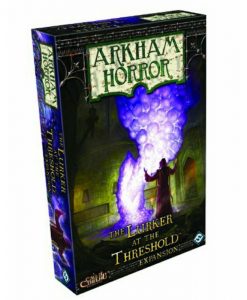 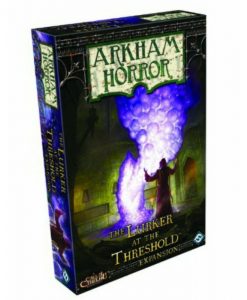 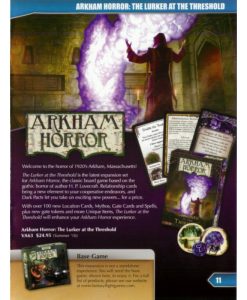 Arkham Horror Lurker at the Threshold

Arkham Horror: Lurker at the Threshhold

Product Description The Lurker at the Threshold is a boxed expansion set for Arkham Horror, the classic cooperative board game for 1-8 players, set in a world of gothic horror created by author H. P. Lovecraft. This expansion will bring new levels of dread to your table top, with the addition of a brand new Herald Sheet for “The Lurker at the Threshold” â€“ a powerful and malevolent being that has appeared to prepare the way for the Ancient One, plus more than 200 components and some extraordinary new game mechanics to boot. Product Description Across Arkham strange doors to other worlds have been opening. They seem to be a living part of an ancient and arcane creature that has been reaching out tempting the unwary with eldritch power. Now people are vanishing without a trace and itÃ¢?TMs up to a handful of bold investigators to confront the profane being who dwells just beyond these passages. But even working together will they be able to destroy these unnatural and deadly gates without themselves striking a terrible bargain with the Lurker at the Threshold ?