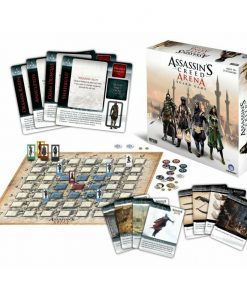 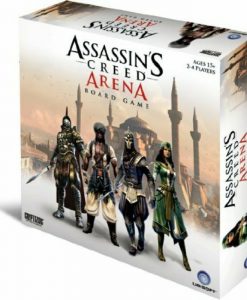 In Assassin`s Creed: Arena â€“ based on the Assassin`s Creed video game series from Ubisoft â€“ players compete to uncover the best targets for assassination, but before you can go in for the kill, sometimes you have to deal with pesky guards as well as your opponents. Players will collect cards and treasure, move guards, and hide within the city of Constantinople until they find their time to strike. Combat is handled through cardplay, and the player who best manages his cards will have the best chance at victory.

At the start of each player`s turn, he draws an Event card, which can spawn new targets in the outer city, move guards, or allow you to find a tunnel to another section of the city. Moving guards is a great way to get them away from you and place them near your opponents. Targets cannot be assassinated while a guard is nearby, but fortunately the guards can be dispatched if need be.

Cards in hand drive the action, but they are also your hit points. If you run out of cards in hand, you die â€” but just like in a video game, you will soon respawn at your starting area. Moving and attacking targets (or your fellow players) requires playing cards, so doing too much all at once can be risky. Couple that with trying to avoid the guards and you are in for a tension-filled game of cat-and-mouse. To replenish your hand, complete objectives on your movement cards or hide. Hiding in the outer city is easy and grants you lots of extra cards. When you enter the merchant district or the area around the palace, there just arenâ€™t as many places to hide and you will not draw many cards.

Combat is handled through cardplay. No dice are required, although a six-sided die is included to resolve some guard movement. Do you save your best cards for movement or to go in for the kill? He who risks the most has the chance for the most reward!

Be the first to review “Assassins Creed: Arena” Cancel reply