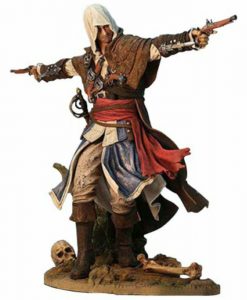 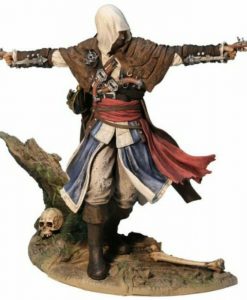 Product Description A new hero for a new era. UBIcollectibles is proud to present “Edward Kenway: The Assassin Pirate”, our new collector`s piece inspired by the next chapter in the Ubisoft franchise: Assassinâ€™s CreedÂ® IV Black Flag. This highly detailed figurine faithfully reproduces the look of Edward Kenway as seen in the video game, showcasing the character`s new weapons and skills. Deep in the Mayan ruins, Edward stands arms outstretched, menacingly brandishing his pistols, determined to protect his interests at any cost. This high-quality object is an essential addition to your Assassin`s CreedÂ® collection. This year, for every purchase of the “Edward Kenway: The Assassin Pirate” figurine, UBIcollectibles offers you three items of ADDITIONAL DIGITAL CONTENT to use in Assassinâ€™s CreedÂ® IV Black Flag: Connor Kenway`s Sails Haytam Unique Outfit Color Edward Kenway`s Family Sword Use these bonuses and become the most feared pirate in all the Caribbean! Character description The year is 1715. Pirates rule the Caribbean and have established their own lawless Republic. Among these outlaws is a brash young captain named Edward Kenway. His fight for glory has earned him the respect of legends like Blackbeard, but also drawn him into the ancient war between Assassins and Templars, that may destroy the Golden Age of Piracy.