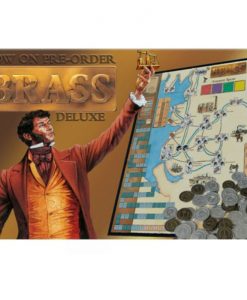 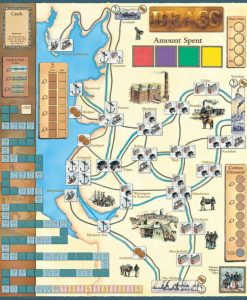 In Brass the players represent industrialists in northern England during the heyday of the industrial revolution. Each player needs to build an economic engine that surpasses the other by the time railways are established and the foreign markets have been saturated with English cotton. The goal of the game is to have the most points at the end of the game. These are obtained in three ways: 1) Building industries and having them successfully utilized 2) Building canal or rail connections to cities that have many successfully utilized industries 3) Money at the end of the game Brass has stood the test of time, ranked #10 on BGG for 4 years and still #15 with a rating of 8.03 on BoardGameGeek.com . Now, with the Deluxe Edition , you can play the game as never before – from 2 – 4 players! DELUXE VERSION 2-Sided Game Board – One side for the normal game, the other for the 2-Player game New multi-cavity PVC Insert with clear cover Metal Coins – A faithful recreation of the coins in circulation during the time period. 60 silver and 40 brass.

Be the first to review “Brass” Cancel reply