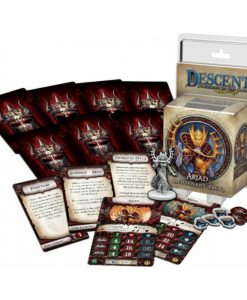 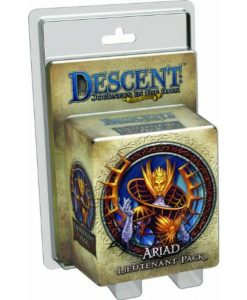 Players can bring lieutenants to life with Lieutenant Packs for Descent: Journeys in the Dark Second Edition. In the Ariad Lieutenant Pack, the dreaded sorceress from the Labyrinth of Ruin expansion becomes every hero`s worst nightmare. A detailed sculpted figure replaces Ariad`s lieutenant token and places her on equal footing with Terrinoth`s champions, while her personalized Plot deck allows the overlord to torment the heroes with her false visions and dangerous illusions. Finally, Ariad can join nearly any campaign as an agent.

Expansion for Descent: Journeys in the Dark Second Edition (Age 14+)
Replace Ariad`s lieutenant token with a sculpted plastic figure
Summon Ariad into any quest outside the Labyrinth of Ruin campaign as a deadly agent
Use Ariad`s Plot deck to pursue the heroes
Threat tokens trigger Plot card abilities,