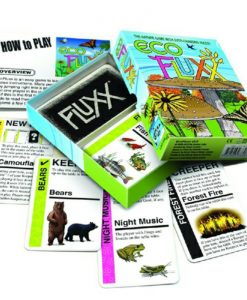 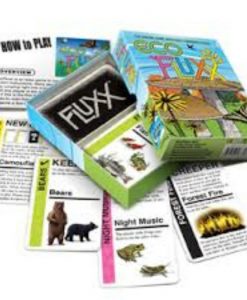 The new edition of EcoFluxx has color art and a handful of Keepers and Creepers added. Gameplay is fast and fun just like original Fluxx but with special nature-themed Keepers like Dirt Bats Lizards and Seeds! Special Eats goals show connections in the food chain and fun Actions like Mass Migration and Extinction and the Rule Composting help set the tone.

What`s in Eco-Fluxx? Well, it`s got a whole food chain of woodland creatures, from leaves to bears. It`s got frogs and snakes and trees and fish and spiders and rabbits and mice and mushrooms and worms. It`s got air and water and dirt, and it`s got the humans whose pollution can endanger such things. It`s got all the standard new rules and actions that make it Fluxx, plus a few new ones that go with the theme, including the Composting rule (which lets you draw from the bottom of the discard pile) and new types of “eating” goals (which lets you win the game if your Keeper says it eats one of the other Keepers in play).
Fluxx is a card game where the cards themselves determine the current rules of the game. By playing cards, you change numerous aspects of the game: how to draw cards, how to play cards, and even how to win.

At the start of the game, each player holds three cards and on a turn a player draws one card, then plays one card. By playing cards, you can put new rules into play that change numerous aspects of the game: how many cards to draw or play, how many cards you can hold in hand or keep on the table in front of you, and (most importantly) how to win the game.

Proceeds from the sale of EcoFluxx supports conservation activism through the EcoFluxx Foundation.

Part of the Fluxx series.

Be the first to review “Eco-Fluxx” Cancel reply