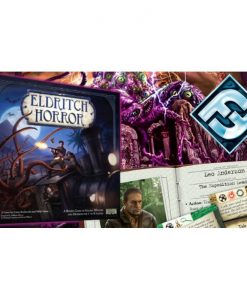 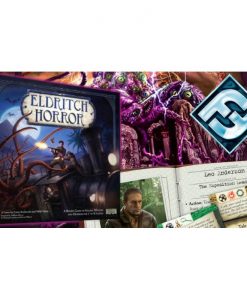 In Eldritch Horror , one to eight players take the roles of
globetrotting investigators, who must work together to solve mysteries related
to an Ancient One â€“ an elder being intent on global destruction. Along the way,
youâ€™ll gather clues, encounter strange and mysterious circumstances, battle
monsters, and embark on daring expeditions. Do you have the courage to save the
world?
Eldritch Horror is a race against evil that spans the entire world.
You and your group of investigators will travel to the worldâ€™s major cities, its
most remote wildernesses, and everywhere in-between while working to prevent the
impending global doom.
Every element of Eldritch Horror is designed to immerse you in its
narrative theme of world-spanning horror and adventure. As the game unfolds, the
narrative woven throughout each and every mechanic intensifies the pressure.
As you and your fellow investigators work against all odds to hold back the
approaching horror, foul monsters, obscure mysteries, and brutal challenges will
take you to your limit and beyond. With terror spreading around the globe,
youâ€™ll be embroiled in this single, last-ditch effort to save humanity from
complete ruin. Tensions run high, and the fate of the world is in your hands in
these last, desperate days. The choices your group makes could have devastating
consequences.

Be the first to review “Eldritch Horror” Cancel reply