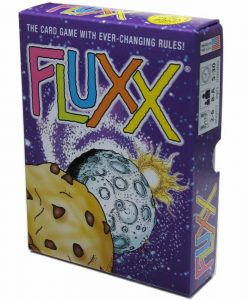 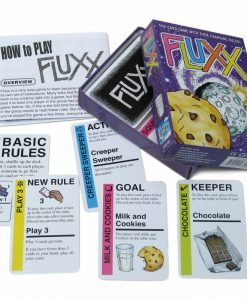 This chaotic but easy-to-learn card game is unlike any other, because the rules change as fast as you play. Players must draw and discard four types of card and accomplish random goals as the game progresses. Topsy-turvy? It`s mayhem absolute fun but!

The card game with ever-changing rules! Fluxx Version 4.0 has many cool features: Colourized artwork based on the originals with a few redrawn (most changed is the Moon) 100 cards instead of 84 New cards include some which debuted as promo cards (like the Party and the Radioactive Potato) the return of old favourites (like the Eye and Taxes) and an all new-Keeper (the Cosmos) War Death and Taxes have been re-classified as Creepers Newly-styled two-piece box with cosmic purple cover art New rulesheet featuring great new Frequently Asked Questions section Another totally new type of card the Meta Rule making its debut in the form of a well-tested tournament rule called Rules Escalation

Be the first to review “Fluxx” Cancel reply