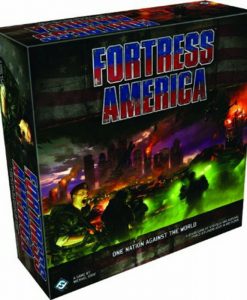 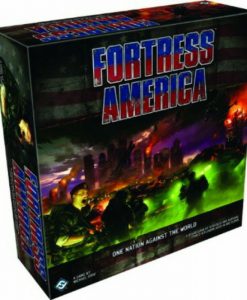 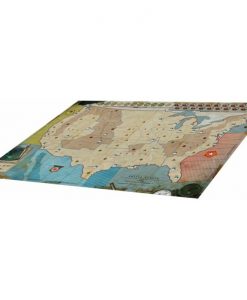 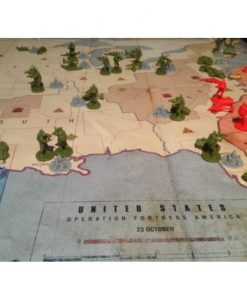 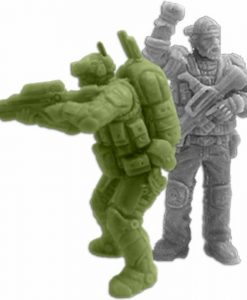 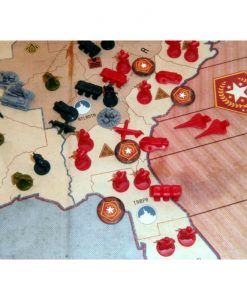 In Fortress America, the United States must defend itself from three deadly invading armies: the Asian People’s Alliance from the West, the Central American Federation from the South, and the Euro-Socialist Pact from the East. Players take on either the role of the United States, struggling to protect itself from foreign threat, or the role of one or more of the invading armies, fighting battle after battle to acquire important territories.

Fortress America is played over several rounds in which each player musters his forces, moves into enemy-controlled territories, and engages in fierce firefights. But depending on whether you’re the U.S. player or one of the Invaders, your play experience and general strategy will be entirely different. The U.S. must efficiently wield its colossal lasers, the ultimate weapons of mass destruction, in its own defense. What’s more, as U.S. hovertanks, helicopters, bombers, and infantry are destroyed and removed from the map, a steady supply of American guerilla fighters spring up to defend their homeland. The U.S. player is surrounded and alone, and must do his best to fend off advances on three fronts in a series of tense battles.

The Invaders, on the other hand, must remain constantly aggressive. Their objective is to collectively capture 18 of 30 major U.S. cities, and to do so, they must apply early pressure before the U.S. has a chance to react, and keep the pressure constant. To complicate the Invaders’ mission, their armies do not receive additional reinforcements, so they must make optimal use of the forces at their disposal. Through a series of nail-biting battles that use a unique dice-based combat system, each player will maneuver his dwindling armies to secure his objective. But can America be stopped, or will a failed invasion only compel them to tighten their military grip on the world.

Changed in this edition:

Convenient custom dice obviate the need to consult charts during combat.
A ten-turn timer gives the U.S. player an additional path to victory: outlasting the invasion.
A “Captured City” track lets all players see, at a quick glance, how close they are to victory or defeat.
A small number of cities have been removed from the map, and others added, to create a more strategically satisfying experience.
A deck of cards for the Invader players has been added to use as a rules option.