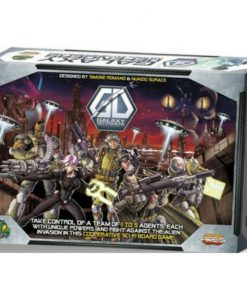 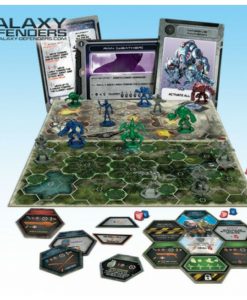 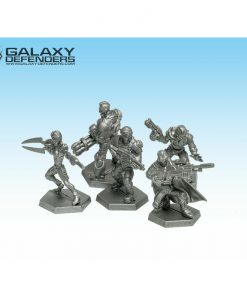 Galaxy Defenders is a sci-fi cooperative, tactical battle game in which 1-5 players fight together against an oncoming alien menace. Each player takes control of one or more agents with unique powers to defend the planet from the alien invasion. Gameplay revolves around a tactical combat system, using custom ten-sided dice. Each player sequentially plays his Agent turn and then one Aliens turn. Players carry out their turns [agent and aliens] in clockwise order until the last player finishes his Aliens turn. Once done, the game passes to the Event phase that will bring the players to the next round. Players may choose up to five agents:

Marine: Coming from U.S. Special Forces, the Marine is an excellent soldier who can manage different combat situations, especially multiple enemies.
Biotech: The Biotech is the most technologically adept agent in service. He can use Nano-Technology to heal wounds or control war drones.
Infiltrator: A deadly and stealthy agent. This lethal specialist prefers hiding in the shadows. She has fast movement and good short-range combat ability.
Sniper: A silent sharpshooter and expert in camouflage and ranged combat. The sniper has average movement and excellent long-range firepower.
Hulk: The Hulk was a successful mercenary and now is one of the best agents; although slow, he enjoys an extraordinary resistance to damage and has high firepower.
There is no “Alien player” in Galaxy Defenders; instead, the aliens are controlled by the game system itself, through an artificial intelligence system based on two types of cards:

Alien cards, which define the behavior of each different alien and detail its skills and combat abilities.
Close Encounter cards, which are used at the beginning of each alien turn to determine which aliens activate.
The combination of a unique AI for each alien species and the uncertainty about alien activation in a turn provides a realistic simulation of the chaos of battle and a sophisticated challenge for the players. Since having more agents brings more alien activations for the aliens, the turn structure allows the level of difficulty to scale dynamically based on the number of agents in play. If agents die during the game, the system “recalibrates” the difficulty to a reasonable and enjoyable level, so you still have a chance to complete the mission.

The battle for Earth will be carried out in a series of twelve missions organized in a completely story-driven campaign. Mission events influence future games in two different ways:

Each mission has multiple endings, and the outcome of any mission will change the flow of the story.
The agents gain experience during the missions. This experience transforms a good soldier into a perfect Galaxy Defender agent with multiple skills, basic and improved tactics, and the ability to use new devices, improved human weapons, and Alien technology.

With the downloadable Galaxy Defenders: Alien Mind variant, you can transform the game into a competitive affair, with one player becoming the alien mastermind and controlling the alien army and the card in play, attempting to thwart each mission undertaken by the Agents. To do this, the alien player completes his own game objectives, obtaining new “alien signals” that can be teleported onto the battlefield. This variant, which allows for play with up to six players, can be used in a single mission or for a whole campaign of Galaxy Defenders. Using Alien Mind may increase the game difficulty and is suggested only for expert players.

Be the first to review “Galaxy Defenders” Cancel reply