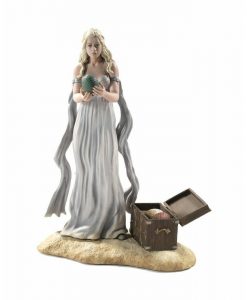 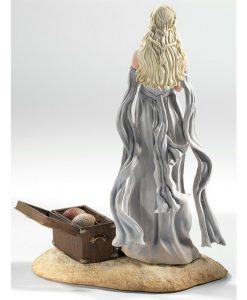 High-quality figures based on the Game of Thrones tv-series!
These figures are non-articulated, and are packaged in a window box. The first two characters in the series will be Daenerys Targaryen and Jon Snow, both standing at 7.5″ tall. Daenerys Targaryen, also known as Daenerys Stormborn is the only daughter and youngest child of King Aerys II Targaryen and his sister-wife, Queen Rhaella. Illyrio Mopatis, serving as patron to the exiled Viserys and Daenerys Targaryen, arranges a marriage between Princess Daenerys and Khal Drogo during one of Drogo’s visits to Pentos. In return for his bride, Drogo is to provide ten thousand Dothraki warriors for her brother’s campaign to retake the Iron Throne.