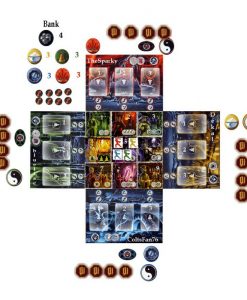 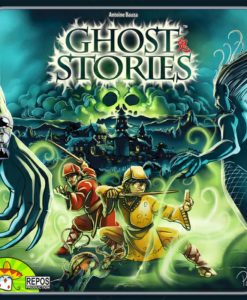 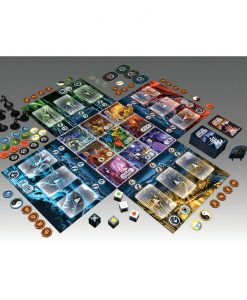 The Lord of Nine Hells walks the earth. Wu-Feng, the Lord of Nine Hells, has discovered the village hiding the funeral urn containing his ashes. Four Taoist priests protect the village, as hordes of ghosts and demons descend on the town to reclaim the remains of their evil overlord. Can you hold out against the forces of eternal darkness, or will Wu-Feng recover his ashes and destroy everything in his path? In Ghost Stories, the players work together as the Taoist priests attempting to turn back the tide of evil and save the doomed village. With mystical powers and ancient martial arts, the heroes will battle wave after wave of ghosts and demons until Wu-Feng himself rises to claim his remains. Working together is your only hope, as the ghosts increase in number and force the Taoist priests to sacrifice resources, time and even their very lives in this desperate battle against the hordes of Hell. Ghost Stories is a cooperative game for one to four players. With modular playing tiles and a randomized deck of ghastly foes, no two games will be alike. The cards and tiles boast fantastic illustrations inspired by kung-fu legends, and a variety of excellent plastic playing pieces will draw you into the game. Gather your forces and battle the Lord of Nine Hells in the ultimate battle of good versus evil!

Be the first to review “Ghost Stories” Cancel reply