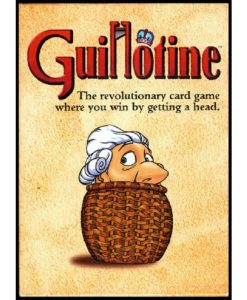 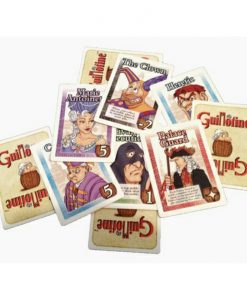 The revolutionary card game where you win by getting a head !
Play a game of Guillotine and heads are going to roll! Players become
executioners vying for prestige during the turmoil of the French Revolution. Why
send an “Innocent Victim” to the Guillotine when you can “Let Them Eat Cake” as
you send Marie Antoinette to the front of the line. Each game is divided into
three days of mob justice. During each day, twelve “enemies” of the Revolution
are lined up for their turn at the Guillotine. The executioners (the players)
take turns moving the next victim through the line while playing action cards to
attempt to position the nobles of the highest value at the front. The player
with the highest point total at the end of the third day wins the game!
Contents of Guillotine:
50 Noble cards
60 action cards
Cardboard Guillotine with Executioner
Illustrated rules No. of Players 2 – 5

Be the first to review “Guillotine” Cancel reply