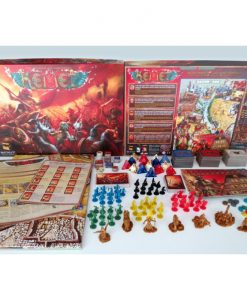 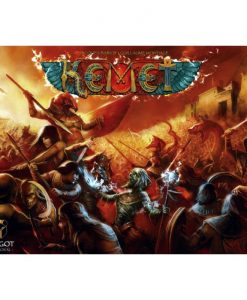 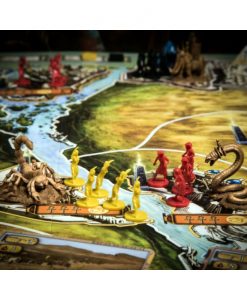 In Kemet, players each represent an Egyptian tribe and will use the mystical powers of the gods of ancient Egypt along with their powerful armies to score points in glorious battles or through invasion of rich territories.The conquest for the land of Kemet takes place over two phases: Day and Night. During the day, choose an action amongst the nine possible choices provided by your player mat and perform it immediately. Once every player has taken five actions, night falls, with players gathering Prayer Points from their temples, drawing Divine Intervention cards, and determining the turn order before the start of the new day.As the game progresses, they can use Prayer Points to enroll magical creatures and have them join their troops. In addition to intimidating enemies, these creatures provide special powers!Expect to see lots of detailed components, as in Matagot’s Cyclades, to represent the armies and immortals. Age range: 13 + / Number of players: 2 to 5 / Play time: 90+ minutes Manufacturer: Asmodee Editions 1 Game Board, 48 Power Tiles (16 each of white, red & blue), 7 Creatures: Sphinx, Phoenix, Mummy-Priest, Giant Scorpion, Royal Scarab, Deep Desert Snake and Ancestral Elephant, 35 Divine Intervention cards, 32 Battle cards, 53 Victory Points, 3 silver and 1 golden action tokens, 5 sets of player equipment in five colors, each consisting of:, 12 Units, 5 Action tokens, 1 Prayer Point marker, 1 individual Board, 1 order marker, 3 Pyramids (1 white, 1 red and 1 blue), 6 battle cards, Rulebook 1 Card index for Divine Interventions and Powers

Be the first to review “Kemet” Cancel reply