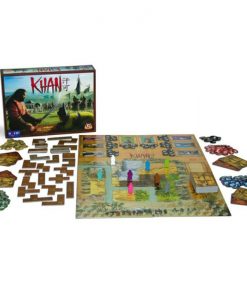 1244 – The Mongol Empire rules from Eastern Europe clear across Asia to the Pacific Ocean. It was (and still is) the largest contiguous empire in the history of the world. The Great Khan rules from the capital Karakorum over the empire and he sends out his best generals to conquer more areas for the ruler of all Mongols. Mongol strategy gives individual generals a high degree of independence in deciding how to invade and conquer new territories, so long as they keep to the overall objectives. The Mongol armies are highly mobile and enemies are terrorized by their ability to appear everywhere at once. To prevent enemy rulers from being able to regain control of their armies, the Mongols drive the rulers out and pursue them relentlessly wherever they flee. In KHAN it’s your task to chase out the 8 different rulers of the lands that you are invading and to conquer as many valuable areas as you can. The general that fulfills this task the best will be proclaimed the next Great Khan. Each player invades areas by placing his yurts on the board. A player can then conquer two or more adjacent areas by laying one of the variously shaped conquer tiles over the yurts (not all the yurts need to be the player’s own). Conquer tiles will bring the player victory points – the larger the conquer tile, the greater the number of victory points. At the end of the game the players with the largest connected conquered territories will gain additional victory points. The player who then has the most points is the winner.

Be the first to review “Khan Board Game” Cancel reply