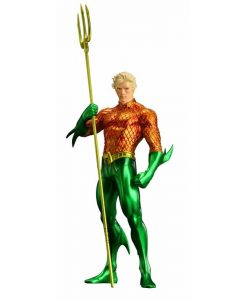 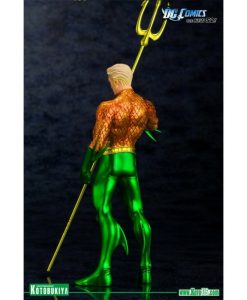 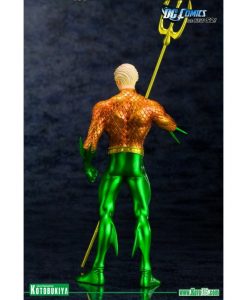 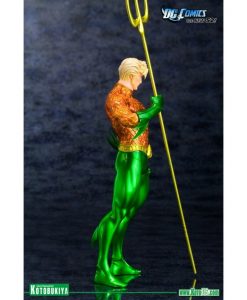 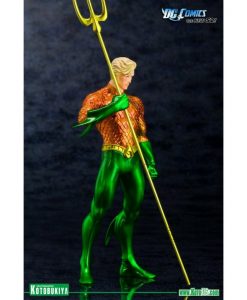 A former ruler of Atlantis who seeks to defend the world both above and below the waves, Arthur Curry is a powerful warrior and leader. While it has been revealed that he has had previous adventures with other teams, Aquaman
A Kotobukiya Japanese import. Kotobukiya`s line of DC Comics “New 52” ARTFX+ Statues continues, capturing the new looks and costumes of heroes in the Justice League. Joining the previously released Superman, Green Lantern, Flash, and Wonder Woman is the half-Atlantean AQUAMAN. The current incarnation of Aqua man makes the character larger than life, with strength, intelligence, and powers that make him a valued member of the Justice League. Arthur appears here in the ARTFX+ lineup with a fantastic representation of those heroic ideals, standing with all of the quiet grace of an otherworldly ruler. Aquaman`s iconic costume is captured with every fine detail from the intricate overlapping scales of his metallic orange armor to the creases and pointed fins on his green pants and gloves. The muscular aquatic hero holds his mighty trident in his right hand, calmly staring down the threats arrayed before him from under his wavy blonde hair. Standing nearly 8 inches tall (in the ARTFX+ 1/10th scale), Aquaman was sculpted by master artist Goutaro Takeuchi (Atelier Bamboo). Like the other Justice League members Aqua man has magnets in his feet for perfect stability on the included display base, and he`ll look great displayed on your shelf by himself or alongside his teammates. Only two more Leaguers left to go.