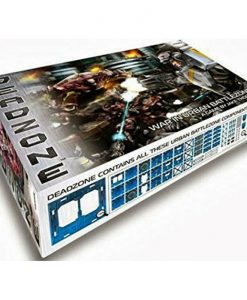 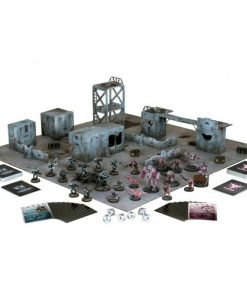 Unit Type: Boxed Game Command the most dangerous soldiers in the universe! In Deadzone, you control an elite squad of soldiers and engage your opposition in furious fire-fights within the depths of an urban battlezone, with a will to survive at all costs. Featuring stunningly detailed miniatures and amazing modular scenery, Deadzone puts you in the centre of exciting battles with variable mission objectives: capture enemy intel, assassinate the enemy leader… eliminate the opposition! Deadzone features two crack teams of upgradeable elite troopers, both with powerful heroes and devastating heavy weapons. The two forces fight in an urban warzone, created using the astoundingly high quality gaming mat and the plastic building tiles and accessories included in the box. These are fully modular and can be built in any combination you desire – the only limit being your imagination! With a simple set of rules for tactical and strategic gameplay and all of the cards and counters you need to play, this box contains everything you need to become the commander of your own Deadzone Squad and wage war in across an Urban Battlefield.