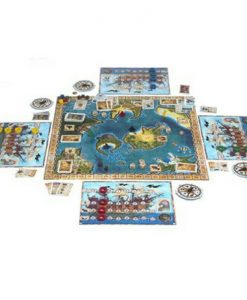 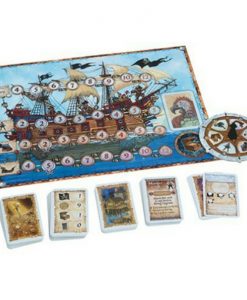 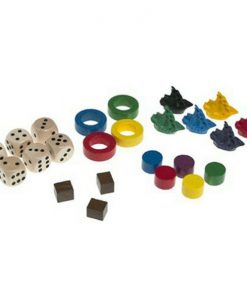 1 Board map of the Pirate`s Cove waters 7 Pirate ship miniatures 5 Pirate Ship Mats 5 Captain`s Wheels 5 Wooden Fame markers 20 Strength markers 112 Illustrated cards 44 Doubloons 50 Treasure chests 6 wooden dice 1 Rules booklet 1 Summary Card 1 Days of Wonder Online access number Product Description In Pirate`s Cove, players take on the role of ship captains as they battle for the rights to plunder and become the most famed and feared Pirate the world has ever seen. To do so, they will need to navigate shrewdly, fight recklessly, and pillage mercilessly. Gain fame by winning battles, burying gold and treasure, and bragging about your exploits at the Tavern, and at the end of twelve months, the pirate with the most fame will be declared the most fearsome Pirate of the High Seas! A swashbuckling board game for 2-5 fortune-hunters, ages 10 and up.

Be the first to review “Pirates Cove” Cancel reply