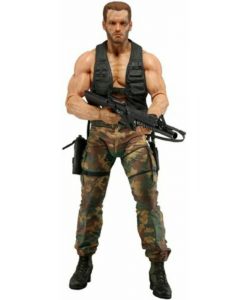 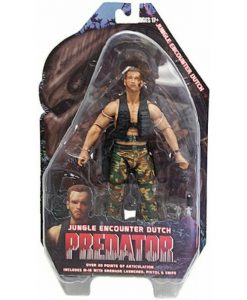 The 9th Series in the #1 selling Predator collection celebrates the 25th Anniversary of the original 1987 Predator film with the follow-up assortment featuring Arnold Schwarzengger as Dutch Schaefer! Series 8 was an instant sellout and Series 9 delivers 2 brand new versions of Dutch along with an all new scene specific version of the Jungle Hunter.

Jungle Encounter Dutch is faithful to his appearance when he first encounters the Predator in the jungle, complete with all new shirtless torso and military vest, features over 20 points of articulation, an M-16, Pistol, and Knife accessories.