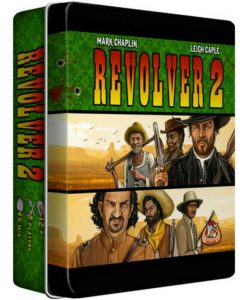 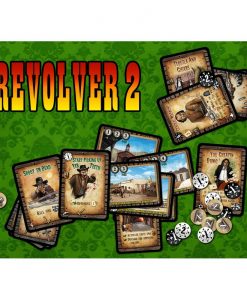 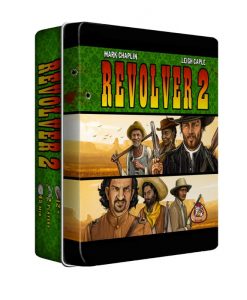 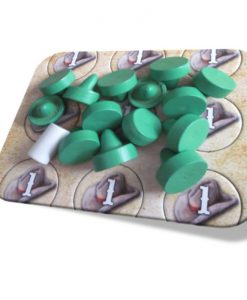 Revolver 2: Last Stand at Malpaso is a two-player card game set in the Old West, in which one player takes the role of General Mapache and his band of thieving outlaws, and the other player controls the villagers and guardians hired to protect the town of Malpaso, led by the infamous Padre Esteban. Each player has a unique deck of cards with unique possibilities as well as different winning conditions, which requires different tactics and different methods of play. More than just new locations, Revolver 2 features brand new gameplay elements in players can use a mine cart-mounted Gatling gun, blow up a bridge, assemble their own team of gunfighters, and dynamite mine tunnels. The game also includes a terrific Stud Poker mini-game which determines in which town the initial firefights occur. Like the original Revolver, the game remains elegantly simple and can be learned in five minutes. That said, Revolver 2 is a standalone game and the cards from Revolver and its expansions (red packaging) are not interchangable with Revolver 2 and its expansions (green packaging). Great 2 player game Easy to learn Playing time: 45 mins Ages 12 + 2 players * Box Contains 1 x “General” Mapache Raiders deck (62 x cards) 1 x Malpaso Guardians deck (62 x cards) 19 x Guardian character cards 9 x Battlefield cards 1 x Gatling gun card 1 x “Blow up the bridge” card 1 x “Collapse the tunnels” card 1 x “All Rivers” Poker Tourney card 1 x Arrival of the Mexican Army card 12 x Poker Tournament cards 14 x Mexican Army tokens 13 x Power tokens 1 x Turn marker Rulebook

Be the first to review “Revolver 2 Card Game” Cancel reply