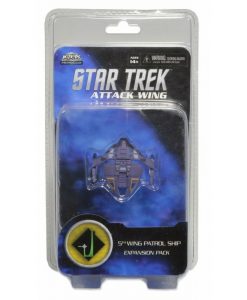 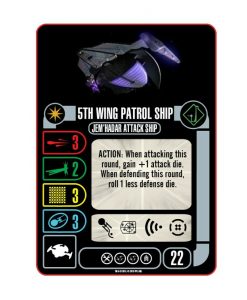 The 5 th Wing Patrol Ship Expansion
Pack introduces one more Dominion ship to the game in the form of the
Jemâ€™Hadar Attack Ship . At 22 points, the 5 th Wing Patrol
Ship sports an extremely nimble movement dial and the ability to
increase its damage output by gaining on additional attack die at the expense of
losing a defensive die that turn. For 2 points less, a player can play the
non-unique version with a more static attack and defensive capability.
Commanding the ship will be the Jemâ€™Hadarâ€™s Vorta in the form of
Weyoun and Lauran . Weyoun can be disabled to keep your Crew
Upgrades from harm while Lauran reduces the cost of a Dominion upgrade by
2 SP. The Crew themselves also provide great additions to the ship.
Ometâ€™iklan can convert any result to a hit while Tomanâ€™torax has
the ability to discard a Crew Upgrade from an opponentâ€™s ship even if it is
cloaked or has active shields. Virakâ€™kara also provides support by
allowing the Dominion player to disable a crew upgrade on an opponentâ€™s ship and
then be able to use the ability of that disabled upgrade but it should be
noted that he and the rest of the Jemâ€™Hadar crew can only be purchased for a
Jemâ€™Hadar ship.
The expansion also comes equipped with Photon Torpedoes and the
Phased Polaron Beam Secondary Weapons cards. The latter allows all damage
to ignore an opponentâ€™s shields thereby allowing hits to impact straight to the
hull. Tech upgrades come in the form of the Long Range Tachyon Scan which
basically allows the player to spend a Scan token to cancel out the Range 3
defensive bonus of its target while still impacting them with the normal effects
of a Scan token as well as the Suicide Attack upgrade which will allow
the Dominion player to roll an astonishing 8 attack dice against their opponent
(at the cost of the destruction of their own ship).