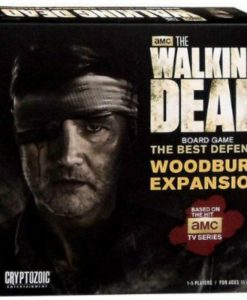 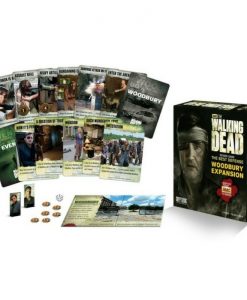 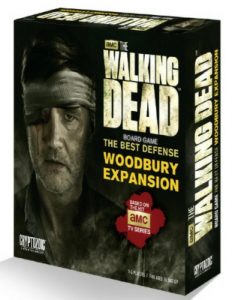 The Woodbury Expansion for The Walking Dead Board Game: The Best Defense brings a whole new challenge to an already desperate group of Survivors. The Survivors may now visit the Woodbury Location and take their chances with the Resource Deck there, but must also avoid The Governor or he`ll gun down anything in his path! The Woodbury Expansion now allows up to five players to play at once and offers an alternate win condition.

The Woodbury Location is added to the standard game set-up by placing it adjacent to two of the four starting Location tiles. Survivors sneaking into Woodbury can take their chances with the Woodbury Resource deck there. These cards have big highs and devastating lows. Examples include: Seduced, Assault Rifle, Enter the Arena, and Bargaining Chip. However, as a well-maintained and protected enclave, the good stuff outweighs the bad â€” and there aren`t very many Walkers to deal with there!

Alternate Victory Condition: If your team of Survivors can draw up all of the Woodbury cards or find other ways to deplete the entire Woodbury deck, the Survivors win the game! The Woodbury deck begins the game with five cards per Survivor (plus a base five cards), so it`s a well-balanced objective no matter how many Survivors there are.

Watching over everything is The Governor. Armed with his heavy Assault Rifle, he moves around the board causing all sorts of problems for the Survivors. However, with careful planning and some risk management, crafty players can get The Governor to help clean up pockets of Walkers. Just don`t get too close to him when the bullets start flying, or you might get caught in the crossfire!

The Governor is an automated game piece on the board that moves to a new Location each round and creates plenty of panic. Alternately, the expansion provides a new “Versus Mode” where one player takes on the role of The Governor and works against all of the Survivors! The Survivor players must now win the game as a team or else The Governor player wins it all for himself. Instead of using automated or randomized movement, a player in control of The Governor can move at his own discretion, turning The Walking Dead Board Game: The Best Defense into a five-player game!