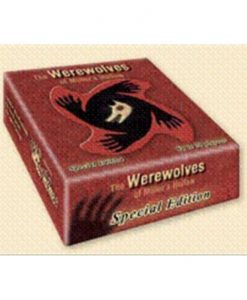 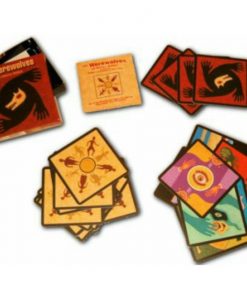 The Werewolves of Millers Hollow Special Edition Board Game

The Werewolves of Millers Hollow Special Edition Board Game

Product Description Werewolves of Miller`s Hollow is a game that takes place in a small village which is haunted by werewolves. Each player is secretly assigned a role – Werewolf, Villager, or special character such as The Captain, The Hunter, the Witch, the Little Girl, The Seer and so on… There is also a Moderator player who controls the flow of the game. The game alternates between night and day phases. At night, the Werewolves secretly choose a Villager to kill. During the day, the Villager who was killed is revealed and is out of the game. The remaining Villagers (normal and special villagers alike) then deliberate and vote on a player they suspect is a Werewolf, helped (or hindered) by the clues the special characters add to the general deliberation. The chosen player is “lynched”, reveals his/her role and is out of the game. Werewolf is a social game that requires no equipment to play, and can accommodate almost any large group of players. Can you find the werewolves before it`s too late? The tiny hamlet of Millers Hollow is beset by monstrous enemies hidden in their midst. Organize the townsfolk and uncover the evil in disguise, so that you can kill the beasts before they claim the entire town, and bring eternal silence to the town forever. Distrust and suspicion run rampant – can you root out the werewolves and save your town, or will you accidentally murder your neighbors in this desperate hunt? Each of you will become one of the residents of the ill-fated town of Millers Hollow. Star-crossed lovers, the police captain, and the hunters can all help hunt down the wolves, with help from the town psychic and a particularly nosy little girl. Convince your friends that you`re human, or you may wind up lynched by the very townspeople you fight to protect. And if you actually are a werewolf, band with your fellow monsters to pick off the frightened townsfolk one by one, until the town belongs to you and you alone! The Werewolves of Miller`s Hollow is a party game for eight or more players. Featuring evocative art and social play, the game will have you bluffing, arguing and outright lying to cover up your identity and reveal the true monsters before you join their hideous ranks! In this Special Edition of Werewolves of Miller`s Hollow, rediscover your favourites from the original set. And, for the first time with full-sized artwork: five extra characters from the New Moon expansion. Let yourself be tempted by these “were-y” curvy cards. A game designed by Philippe des PalliÃ¨res & HervÃ© Marly. Contents: 28 cards, 1 cardboard medal, 1 cord, 1 rulebook 8 – 18 players Age 10+ Features 5 extra characters from the New Moon Expansion A social game that can accommodate almost any large group of players Playing Time: 30 mins Ages 10 + 8-18 players