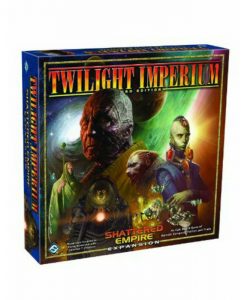 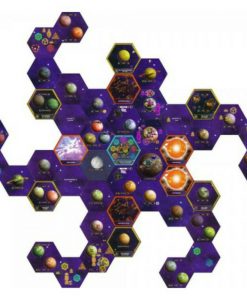 At the end of empire, a faint wind rustled through Salai`s robes. It was a calm, warm evening, and the bruised purple outline of the setting sun was still visible on the horizon. An evening made for calm contemplation and peace. Verus came to his emperor`s side for the last time. Together, the two stood in the trembling tower, silently witnessing a bloom of fires grow in their city like a garden of destruction. The next wave of bombardments destroyed the imperial palace and everyone therein. The Lazax empire has fallen – first into decay, and then, after a long twilight, into history. It is done and gone, but a new day is dawning, and your people have a new chance to mold the Twilight Imperium to the design of your race. Twilight Imperium: Shattered Empire is an expansion for Twilight Imperium Third Edition. It enhances gameplay with a variety of new options and enables you to play with seven or eight players in an epic struggle for true galactic dominance!