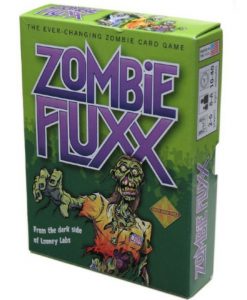 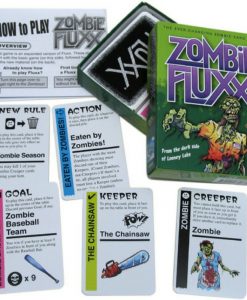 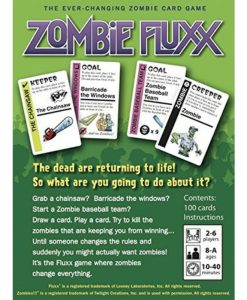 Product Description
The card game with ever changing rules! It
starts out simple, with just the Basic Rule card: draw one card and play one
card during each player`s turn. But New Rule cards quickly make things chaotic.
Even the object of the game will often change as you play, as players swap out
one Goal card for another. Zombie Fluxx is the zombie version of the original
card game Fluxx with a new card type added

The Ever Changing Zombie Card Game The dead
are returning to life! So what are you going to do about it? Welcome to the dark
side of Fluxx, the card game of ever-changing rules! Zombie Fluxx takes the
award-winning card game Fluxx and cranks up the fun with a Zombie uprising. The
Zombies arrive in the form of a new type of card, called the Creeper, which
hangs around in front of you, preventing you from winning. The good news is, the
Keepers include a Shotgun and a Chainsaw and various other things you can use as
weapons against the Zombies. Plus you`ve got Sandwiches and Coffee and a couple
of Friends to help you win. The bad news is, if your Friends become Zombies,
you`ll have to destroy them! Age 8+ for 2 – 6 players. Playing time: 5 – 30
minutes