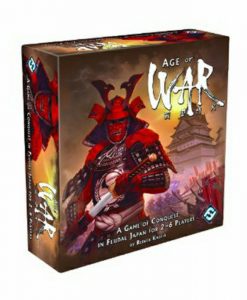 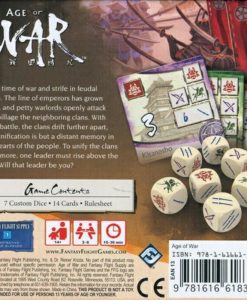 Age of War is a fast-paced dice game for two to six players, created by award-winning designer Reiner Knizia. In the game, players take on the roles of daimyos in feudal Japan, laying siege to castles in an attempt to vanquish their rivals and unite the nation’s clans. Conquering a castle doesn’t make it secure, however, since other players can launch their own sieges against it. To be victorious, a player must act swiftly to seize key castles, unite the clans, and rally Japan to his cause.

â€¢A fast-paced dice game created by award-winning game designer, Reiner Knizia
â€¢Players assume the roles of rival daimyos seeking to conquer castles in feudal Japan
â€¢Seven custom dice allow you to muster your troops and establish your sieges
â€¢Besiege your opponents’ castles to steal their points
â€¢Two player games can play in as quickly as fifteen to thirty minutes

1 Age of War Board Game