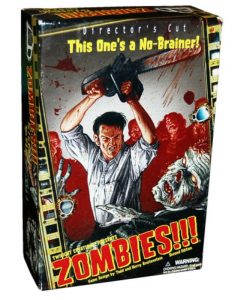 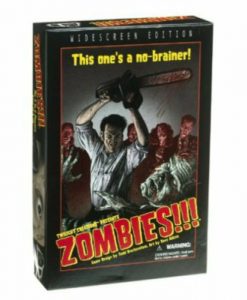 Your heart pounds in your chest and you are finding it very hard to breathe. The Zombies are everywhere and seem quite intent on making you lunch. With so many of them it’s hard to tell if the scraping foot steps and moaning are down the hall or just around the corner. One thing is for sure, they are too close for comfort, you are almost out of bullets and your luck seems to have just run its course! Zombies!!! puts you in the middle of the action as you try to escape the ever advancing zombie horde. Players must use a combination of wits and brawn to be the first to the heliport and certain escape. The only problem is, the zombies are everywhere, they appear to be very hungry and your opponents would really prefer if you didn’t escape. The game for 2-6 players features an ever changing map and an ever-growing army of the undead. Players take turns playing map tiles, placing zombies, running furiously, fighting and generally creating havoc for the opposition. Combined, this makes Zombies!! a different game every time you play it
This expanded edition of Zombies!!! features updated and revised rules, plus gut-wrenching new art on Map tiles and Event cards for greater visual impact, as well as new ‘Red Heart’ Tokens and a brand-new Female Zombie figure!

Be the first to review “Zombies!!! Director`s Cut” Cancel reply