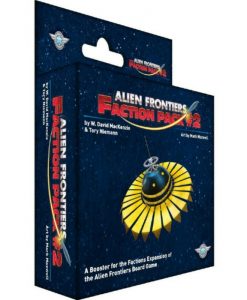 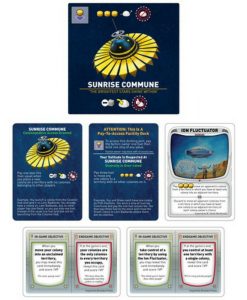 Alien Frontiers: Faction Pack #2 – Sunrise Commune Fleeing persecution on Earth, the “Sunnies” came to Maxwell in hopes of finding a place where humanity would just leave them alone.FACTION ABILITIESOWNER: Pay one less ore than usual for any colony you land on a territory where you already have at least one colony.FACILITY: Pay 3 fuel to move 1 of your colonies to a territory with no other colonies on it.COMPONENTSFaction Board1 new Alien Tech Card2 new Agenda Cards