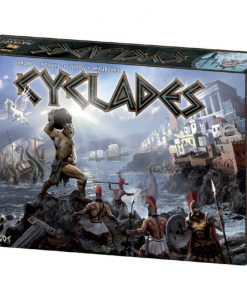 “Be prepared to travel to the Cyclades archpelago during the golden age of the
ancient Greece. With the blessing of the Gods of Olympus and the support of
Mythological Creatures, recruit troops, build ships, create fortresses and
construct metropolises. The struggle to bring your people to their highest glory
will be legendary! With Cyclades, Bruno Cathala and Ludovic Maublanc (Mr. Jack,
Dice Town) reinvents development and conquest games. In a ninety minutes game,
live through an incredible adventure in which soldiers, philosophers,
mythological creatures and gods are common.

Be the first to review “Cyclades” Cancel reply