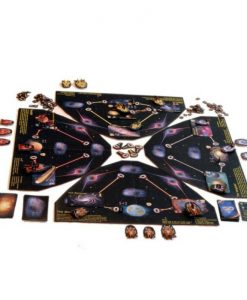 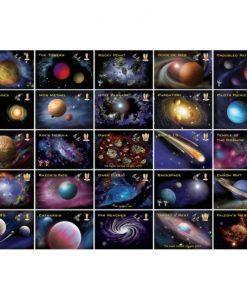 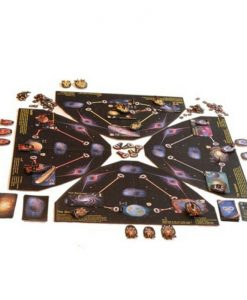 StelCon: Infinity is a light strategy war game on a galactic scale. 2-6 players can expect around 30-45 minutes per player, so 2 players can often power through a game in about an hour. The 6 player game is kept short by combining into 3 teams of 2 where the teammates execute their turns simultaneously. Variable game board. There are 6 races to choose from, each with its own strengths. Although the jump lanes that connect the sectors forming the galactic map are printed on the game boards, each sector location is covered by a different card from the sector deck each game. Sectors are drawn from the deck and placed as the players explore the galaxy, so you never know what you`re going to get…unless you do some scouting with your fighter squads or happen to have some telepaths on board your ship (telepaths are handy that way). Some of the sector cards are identical and therefore also create a “bridge” which is a unique adjacency in addition to the normal jump lanes. All this makes for a very different board every time. Moving your space fleet around is straight forward. Each ship can move 1 sector per turn, plus 1 extra sector per turn per engine MOD. Your space ships are modular in design, both from a gameplay and a literal perspective. You physically insert engines, extra guns, and fighter squads into holes in the space ships. We call these MODs. Combat is simple but tense. Add up your firepower present at the battle site and then toss in a d6 roll. The opponent does the same. Compare the two totals, and the winner keeps the sector in question while the loser retreats and loses a ship from his fleet. While the game is a conquest type game, it ends immediately when one player conquers any homeworld, so there`s no eliminated player stuck waiting around for the game to finish. Conquest cards are the soul of the game. The deck of 120 cards gives tons of gotcha moments, and serious replay value. They allow you to do all sorts of fun things

Be the first to review “StelCon Infinity” Cancel reply