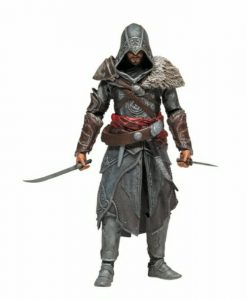 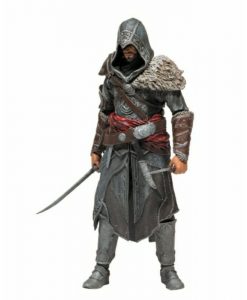 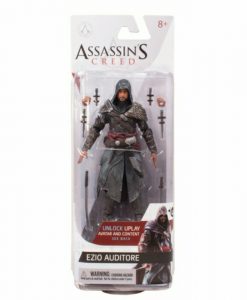 Starting with the second Assassin’s Creed game, players began exploring a new time period, through the memories of another of Desmond Miles’ ancestors — the Italian Assassin, Ezio Auditore da Firenze. The star of three consecutive Assassin’s Creed games, players spent more time as Ezio than any other Assassin, making this charismatic rogue a fast fan-favorite. To offer collectors something strikingly different from the classic Assassin look of AltaÃ¯r’s white robes, our first Ezio figure features the Mentor as he appeared in Assassin’s Creed: Revelations. His adventure to recover the Masyaf keys that AltaÃ¯r had hidden centuries ago featured Ezio clad in a new set of ornate, dark gray robes — far better for the Master Assassin to blend in with the exotic citizens of Constantinople. Figure includes sword, dagger, and a code to unlock Assassin’s Creed content!