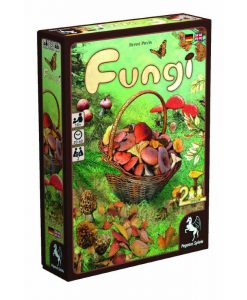 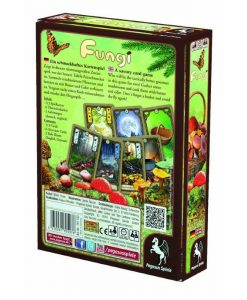 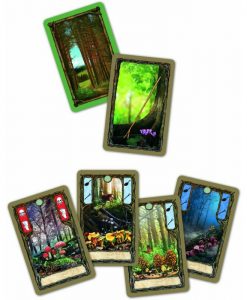 Fungi, a strategic card game for two players, uses two decks: a Day Deck (84 cards) that includes ten different types of mushrooms as well as baskets, cider, butter, pans, and moons, and a smaller Night Deck (8 cards) of mushrooms to be foraged by moonlight. Each mushroom card has two values: one for selling and one for cooking. Selling two or more like mushrooms grants foraging sticks that expand your options in the forest (that is, the running tableau of eight face-up cards on the table), enabling offensive or defensive plays that change with every game played. Cooking sets of three or more like mushrooms â€“ sizzling in butter or cider if the set is large enough â€“ earns points toward winning the game. With poisonous mushrooms wielding their wrath and a hand-size limit to manage, card selection is a tricky proposition at every turn.

Following each turn, one card from the forest moves into a decay pile that is available for only a short time. The Day Deck then refills the forest from the back, creating the effect of a walk in the woods in which some strategic morsels are collected, some are passed by, and others lay ahead

Be the first to review “Fungi” Cancel reply