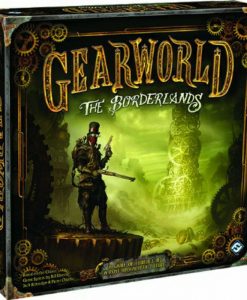 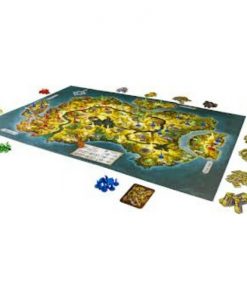 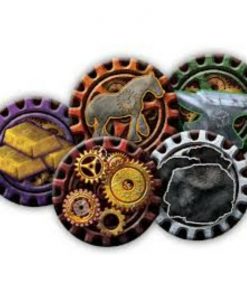 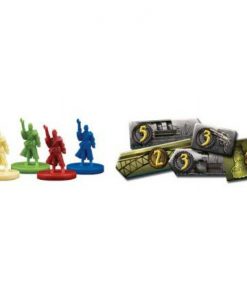 Gearworld: The Borderlands Board Game

Gearworld: The Borderlands is a game of negotiation, conquest, and construction in which two to four players compete to gain the favor of the Sky People for their tribe of scavengers in a post-apocalyptic landscape. Based on the classic board game Borderlands designed by Bill Eberle, Jack Kittredge, and Peter Olotka, Gearworld: The Borderlands has streamlined the original rules and re-imagined the gameâ€™s setting while retaining its predecessorâ€™s spirit and core mechanics.
The people who have ascended above the clouds have long maintained their distance from the Borderlands, but that time must come to an end. The vast stores of power that those in the World Above depend on have finally begun to dwindle. To ease their burden, the engineers have drafted plans for mighty skyworks, towers that will bring the heat of the Fire Beneath to the cities above the clouds. Meanwhile, the scavengers of the Borderlands are a desperate people, and they are constantly in need of supplies in order to survive; luckily, the Sky People will trade with the tribes that build them the skyworks. Gather resources, trade with other players, and battle your rivals in an effort to be the first to develop three skyworks to bring energy to those who inhabit the World Above and gain their favor!
Battling and Bartering for Scraps
The scavenging tribes of the Borderlands have mined the land for generations, are adept at extracting scrap from ruins, and have managed to raise horses in the wastes. Each resource is essential to building your tribeâ€™s strength and, eventually, the skyworks. Resource Tokens represent sites where these valuable raw materials can be produced. Controlling as many of these areas as possible is one step to survival in the Borderlands, but it is only the first.
There are many ways to gain the materials you need, and you may have to rely on your competition to get all the resources you require. Trading among the tribes is certainly not unheard of, and players can negotiate for resources to gain an edge. Take care to not be too generous with your exchanges, however, as your opponents will also stand to profit.
If diplomacy isnâ€™t your tribeâ€™s strong suit, then you can always take what you want by brute force. Battling an enemy is a game of numbers, and if you can overwhelm your opponent with weapons, steamboats, horses, or ships, you can take what you need. If youâ€™re too aggressive, you may make some enemies in the Borderlands, and your opponents can team up against your tribe. Combine your strength to take down a tribe that is close to building all of its skyworks, or reinforce a weaker neighbor to cause problems for an aggressive rival. Forge and break alliances to get ahead in both battles and bartering. In the end, all that matters is the survival of your tribe.
Reaching for the Sky
While building the skyworks is the end goal, each tribe must use its resources wisely in order to reinforce its strength and enhance its ability to transport goods. Combining resources into weapons, bridges, ships, and riverboats while conserving enough to build skyworks is the delicate balancing act that each tribe must undertake.
In order to build any developments, including the skyworks, all of the materials required for its construction must be in the same space, so the effective transportation of resources is essential to your success. Each tribe must produce, trade, or steal the materials they need to build new developments and protect what is theirs, but all the resources in the Borderlands will do them no good if theyâ€™re spread all over the map.
Ships, steamboats, and horses are used to strategically transport goods around the Borderlands, and can also add to your strength in battle. Bridges are a quick and inexpensive way to connect the islands of Claw, Ironside, and Locke to the main landmass of Haestus, potentially opening up new avenues for resources. Invest in developing Weapons to reinforce your military might; theyâ€™ll be extremely valuable when your tribe comes under attack. Take care when building, though. Skyworks are expensive to create and you donâ€™t want to spread your already meager resources too thin.
Acquire resources by conquering your fellow scavengers, carefully defending your own lands, and the clever use of trade and diplomacy to gain an edge.