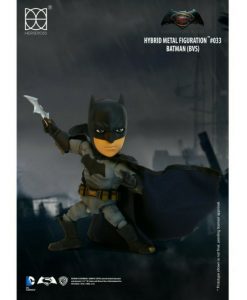 BATMAN VS SUPERMAN: HMF#033 Batman (BvS)
How can Batman a human without super power fight against Superman? After witnessing the chaos Superman brought upon Earth, Bruce Wayne is determined to stop the Kryptonian and dons his heavily armored Batsuit to take on the powerful Superman in the â€œgreatest gladiator match in the history of the world! â€œ Help Batman to collect all the armored parts to fight against Superman!
Comprised of diecast metal, this caped vigilante also features LED eyes, 6 interchangeable hands, Batarang, Grapnel Gun and loads of articulation!
Each release in this BvS series comes with a part of the Armored Batman Version so be sure to collect all three to build the only armor that can compete with Superman!