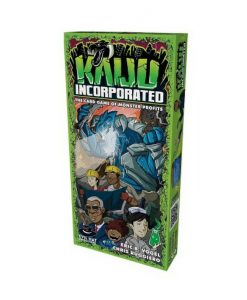 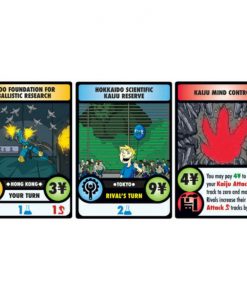 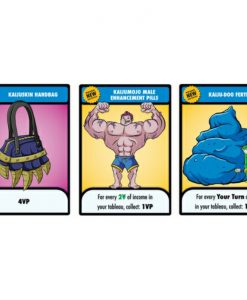 A 300-foot lizard has just trampled the city. As a business owner, your future is clear:
REBUILD AND MAKE KAIJU SKIN HANDBAGS.
Step into the shoes of a company chairman in a land threatened by giant Kaiju. It’s up to you to turn the shattered remains of your city into profit and prosperity, but watch out for the next wave of monster attacks! Make money, construct buildings, and research products related to the war on Kaiju. Collect Victory Points to insure your company’s domination!
Can you lead your company to success and prosperity amidst the rubble and constant threat of blob attacks? Who will corner the market on Kaiju skin handbags? Find out in Kaiju Incorporated!
Kaiju Incorporated is a card drafting, economic game. Each turn players draft a building card and either pay to add it to their tableau or discard it to generate income for themselves and other players. Player’s buildings also generate research, which enables them to draft new product cards. The new product cards score victory points based on the building cards in their tableau. However, generating income can also cause the Kaiju to attack you, destroying buildings or causing other kinds of mischief. 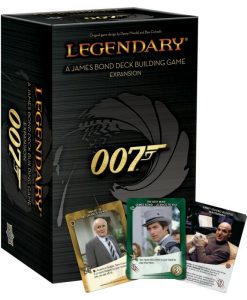