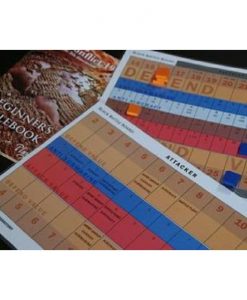 Two alliances fight to gain control of the world. The conflict takes place in five dimensions. First the military war of armies, offensives and great battles. Second the diplomatic pressure to coerce neutral states into the conflict. You and your friends experience face to face the excitement of winning a new ally such as the Spain but also the pain when a trusted partner such as the Soviet Union treacherously changes sides. Third the economic crisis, when critical resources such as iron ore, strategic metals or oil are in short supply. The fourth dimension is the race to develop new war changing technologies and surprise attack your enemies using weapons such as jet aircraft, rocketry or the atom bomb. Finally the fifth dimension is the moral decisions which shaped each nation`s war conduct. Seizing power through extreme violence and destruction is compared with close co-operation, sharing and even sacrifice in the search for peace. The interplay of all five dimensions on each other is the unique Moral Conflict 1941 experience. Each game progresses differently and the options are almost unlimited.

Be the first to review “Moral Conflict 1941” Cancel reply