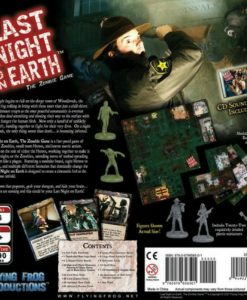 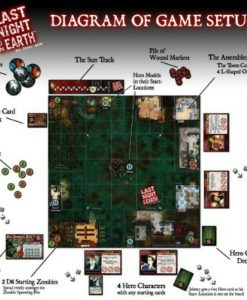 When night begins to fall on the sleepy town of Woodinvale, the shadows and fog rolling in bring with them more than just a chill shiver. A living nightmare erupts as the once peaceful community is overrun with the restless dead scratching and clawing their way to the surface with an insatiable hunger for human flesh. Now only a handful of unlikely Heroes are left, banding together to fight for their very lives. On a night that never ends, the only thing worse than death is becoming infected. Last Night on Earth, The Zombie Game is a survival horror board game that pits small-town Heroes head-to-head against a limitless horde of Zombies (players can play on the Hero team or as the Zombies). A modular board randomly determines the layout of the town at the start of each game and there are several different scenarios to play, adding lots of replayability. Fast Paced Game Play with Easy To Learn rules allows players to jump right into the action, while Strategic Depth and Strong Cooperative Play keeps the game interesting.