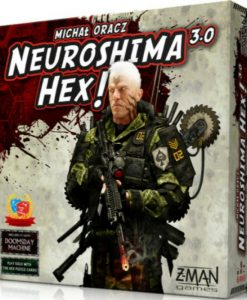 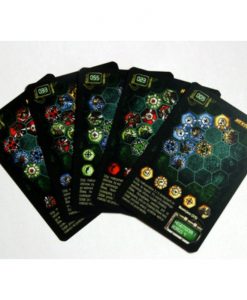 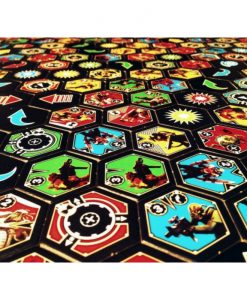 Neuroshima HEX is a game of tactics, where armies wage continuous battles against each other. Neuroshima Hex 3.0 is the return of the series with new artwork and a new, FIFTH, faction included: Doomsday Machine. This edition also includes material that will allow for SOLO play!The world of Neuroshima Hex is that of a post-apocalyptic world torn apart by a war between humans and machines. The remains of humanity took shelter in the ruins of cities and organized in small communities, gangs and armies. Conflicts between such groups are not uncommon and the reasons of such are numerous: territory, food or equipment. MOLOCH sent from the north constantly patrol the ruined cities. Great wastelands that surround what was left of the greatest cities are home to another enemy – BORGO – an army of gruesome mutants. One of humanitys last hopes is the OUTPOST, a perfectly organized army that wages a guerrilla war against MOLOCH. Nevertheless, most human settlements, including the HEGEMONY, are not concerned with war until it comes banging at their door 3.0 Age range: 10 and up / Number of players: 2 to 4 / Play time: 30 Manufacturer: Z-Man Games 1 Game board, 35 The Outpost Army tiles, 35 Moloch Army tiles, 35 Hegemony Army tiles, 35 Borgo Army tiles, 35 Doomdsday Machine Army tiles, 8 HQ Damage tokens, 16 wound tokens, 4 counters, 5 army Reference Charts, 55 cards with Hex Puzzles, 1 rulebook

Be the first to review “Neuroshima Hex!” Cancel reply