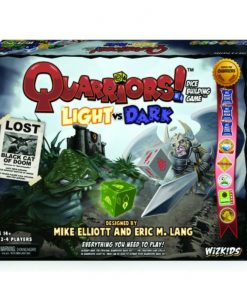 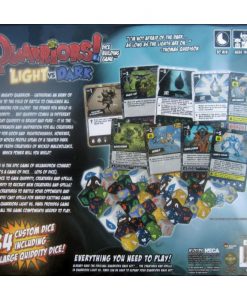 You are a mighty Quarrior – gathering an army of creatures to the field of battle to challenge all other quarriors for glory! The power you wield is called quiddity… but quiddity comes in different forms. Light quiddity is bright and pure – it is the source of strength and inspiration for all creatures who fight for good and righteousness. However, in hushed voices people speak of a tainted dark quiddity that feeds creatures of wicked malevolence. Which power will you wield?Quarriors is the epic game of hexahedron combat! (it’s a game of dice… lots of dice). Roll your dice to gain quiddity, creatures and spells. Spend quiddity to recruit new creatures and spells. Spend quiddity to recruit new creatures and spells! Summon creatures to battle your opponents and score points! Cast spells for varied exciting game effects! Quarriors Light vs. Dark provides game rules and all the game components needed to play.64 Custom Dice.Including 8 Large Quiddity Dice.Style And Colour May Vary.Ages14+

Be the first to review “Quarriors!: Light vs. Dark” Cancel reply