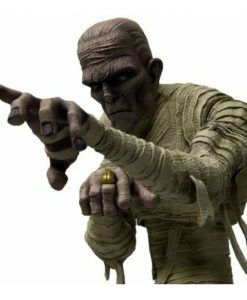 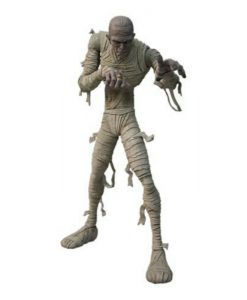 Buried beneath the sands of time, he restedâ€¦ until he was awakened by Mezco’s award-winning design team. Mezco presents The Mummy! This Universal Monsters The Mummy 9-Inch Action Figure features the iconic terror standing 9-inches tall, fashioned with intricate details of each ancient bandage. From his mysterious eyes to his legendary scarab ring, he looks just like he did when portrayed by Boris Karloff in the 1932 The Mummy film. This creepy-crawly action figure has 11 points of articulation, too. He’ll take out any explorer who comes between him and his tana leaves! The Mummy comes packaged in a full-colour collector-friendly window box. Ages 15 and up.

Mummy, dearest.
This creepy-crawly action figure features The Mummy!
Looking just like he did when portrayed by Boris Karloff in the 1932 film.
Stands 9-inches tall, with 11 points of articulation.
Stay away from his tana leaves!