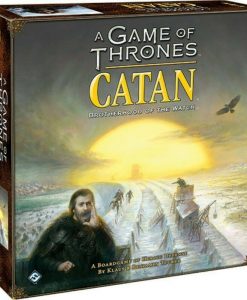 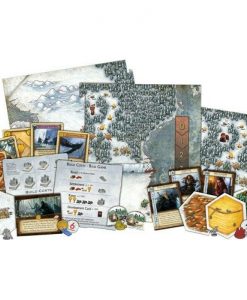 A Game of Thrones Catan: Brotherhood of the Watch

A Game of Thrones Catan: Brotherhood of the Watch – New

The Brothers of the Night’s Watch seek a new leader from among their ranks. Jeor Mormont wishes to promote one who can improve the infrastructure of the Gift, the bountiful and undeveloped area south of the Wall bestowed to the Watch by the Starks thousands of years ago. Drawing sustenance from the unforgiving landscape of the north offers enough challenges, but whomever takes up this task must also man and defend the Wall against the onslaught of Wildlings fighting their way into Westeros. Many brothers now compete to build, defend, and do what they can to protect Westeros, but only one shall rise above their brothers to become the new Lord Commander. But be wary — the north holds many dangers, and winter is coming. A Game of Thrones Catan: Brotherhood of the Watch is based on the classic Settlers of Catan base game. In this game, each area in the Gift supplies one of five resources: lumber, brick, wool, grain, and ore. The barren Ice Fields, however, produce nothing. Players take on the role of Brothers of the Night’s Watch and use these resources to strengthen their hold on the north by building roads, settlements, and keeps; recruiting guards for their patrol; or buying development cards. Each of these acts bring players increased power and recognition through the awarding of victory points. The objective will be familiar to players of the original Catan; the first player to achieve ten victory points wins the game and becomes the new Lord Commander of the Night’s Watch. Do you have what it takes to lead the Brotherhood of the Night’s Watch? Can you balance your pride and ambition with the need for a strong presence at the Wall? Will you save Westeros or betray it? Take the Black. Defend Westeros. Become the Lord Commander. Forge your legend with A Game of Thrones Catan: Brotherhood of the Watch!

Be the first to review “A Game of Thrones Catan: Brotherhood of the Watch” Cancel reply