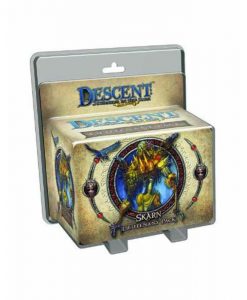 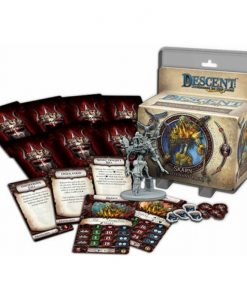 Skarn’s origins lie shrouded in mystery. Some believe that he has always guarded the manor house, even before the death of the High Mage that lived there. Others suggest that he was unintentionally created from residual magic released by the wizard’s death. Still others would say that the ravens created a new guardian after the passing of their old master. Whether Skarn is a raging monster hungry for power or a misunderstood soul devoted to a lonely cause, all agree that Skarn’s potential stretches far beyond what can be allowed.

Descent: Journeys in the Dark (Second Edition) â€“ Skarn Lieutenant Pack includes a detailed, sculpted plastic figure of Skarn to replace the lieutenant token included in the Manor of Ravens expansion as well as a ten-card Plot deck that lets you spread Skarn’s regenerative abilities to the monsters under your command.

This Plot deck also gives you the opportunity to unleash Skarn on Terrinoth by summoning him into battle as your agent in any quest that does not include him as a lieutenant. In battle, heroes will find Skarn a powerful opponent, resilient to damage and able to mend his own wounds in the heat of combat. What’s more, Skarn’s attacks frequently damage more than one hero, possibly threatening an entire hero party at once if they move in too close.