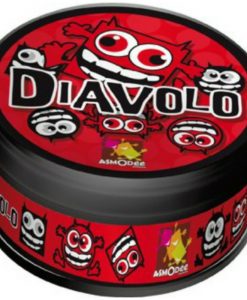 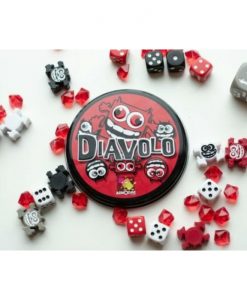 Sometimes even imps in Hell get to take a break and if it’s a really hot day (which it usually is since, you know, it’s Hell) the imps head to the bar at the Last Judgment Inn. Rather than each imp paying for its own drink, they play a dice game to determine who’s buying the next round of Diavolo, the “drink that keeps imps really red in the face”. Each turn in Diavolo, someone rolls the ten dice: three each of red, black and white, and one special big grey die. This last die, the “order” die, gives players an order, and they must then decide as quickly as possible which of the coloured imp pieces they must grab. An order might have them checking which color of dice has the largest or smallest sum, which color has the biggest difference between two dice, which color die is closest to the grey die, and so on. If a player takes the wrong imp (or no imp at all), he loses one of his gems. When all but one player have been eliminated, this final player wins. If you’re getting low on gems, don’t despair as you can sometimes gain more. If the instruction on the order die would allow you to grab two (or even three) imps, then you must instead grab the grey imp. Doing so nets you a gem…unless, of course, you’re wrong.
Product Description
The hunt for the Imps is on! Throw the dice to work out which imp you have to catch – then grab it first! Age: 10 Players: 2-6