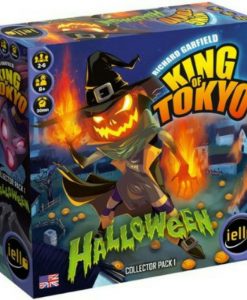 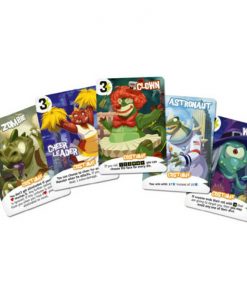 This exclusive, limited pack includes new Halloween-themed contents to be played with King of Tokyo! Meet Jack Oâ€™Lantern with its enormous pumkin head, and Boogy Woogy the gigantic bogeyman! Those two new, scary monsters come with their own sets of Evolution cards. This mechanic introduced by the Power Up expansion provides each monster with 8 squareshaped cards to mutate into an even more nightmarish version of itself! But for Halloween, the original King of Tokyo monsters may want to look a bit spooky too: 12 new Power cards allow them to fit in! An exclusive card for the next â€œKing of Tokyoâ€ standalone game (to be released in March 2014!) will be featured as a promotional item. The pack also includes a set of 6 orange-and-black engraved dice, perfectly fitting the Halloween theme. Box Contains 2 new monsters (boards, tokens and plastic stands) 16 Evolution cards 12 new Power cards 1 exclusive promo card 6 special six-sided dice