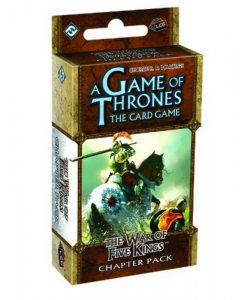 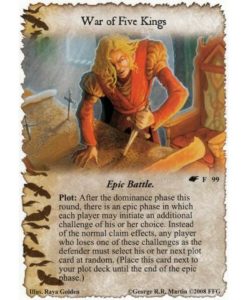 A Game of Thrones Lcg: The War of Five Kings Revised Edition

A Game of Thrones Lcg: The War of Five Kings Revised Edition

The War of Five Kings is the first monthly instalment of fixed cards for the “A Clash of Arms” cycle for A Game of Thrones: The Card Game, based on George R.R. Martin’s best selling Song of Ice and Fire saga. This Chapter Pack contains twenty different never-before-seen cards designed to augment existing decks and add variety to the A Game of Thrones metagame. (The first edition of this Chapter Pack included only one of each character card, while the second edition includes three copies of each card.)

“A Clash of Arms” cycle:

Be the first to review “A Game of Thrones Lcg: The War of Five Kings Revised Edition” Cancel reply