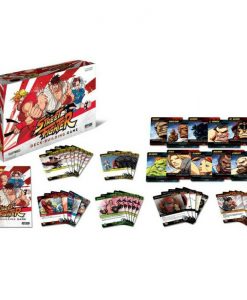 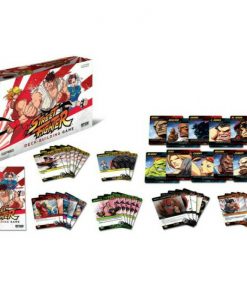 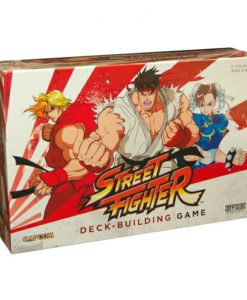 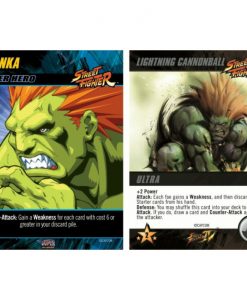 In the CapCom Street Fighter Deck-Building Game, you take on the role of Ryu, Ken, Chun-Li, Balrog, M. Bison or one of the other well-known characters as you travel to exotic locales seeking new challenges! While you begin armed only with basic combat maneuvers, you will add new, more powerful cards to your deck as you go, with the goal of defeating as many Stage Bosses as you can.

Each player starts with his own basic ten-card deck and draws a hand of five cards each turn. Power is the currency you will use to buy new, stronger cards to add to your deck. The goal of a deck-building game is to craft your personal deck into well-oiled machine, and five types of cards can be acquired: Villains, Heroes, Equipment, Super Powers, and Locations. A large, central stack of cards supplies a five-card “Line-Up” from which players make their purchases. Each player will always have five cards to choose from each turn, so every turn there are new options and new surprises.

When a player has amassed enough Power, he may attempt to defeat the current Stage Boss. When a Stage Boss is attacked, it retaliates against the attacker! With Street Fighter, the action is often one-on-one. Players can defend themselves with Defense cards like Chun-Li`s Bracelets and Electric Thunder. Each player also has access to a special Ultra card that is one of his character`s signature maneuvers. In the end, the player who has accumulated the most Victory Points from the cards in his deck wins.