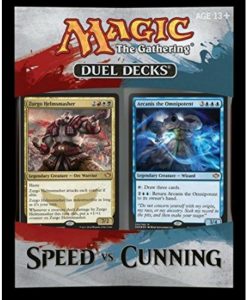 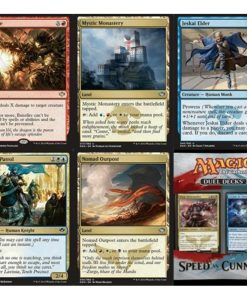 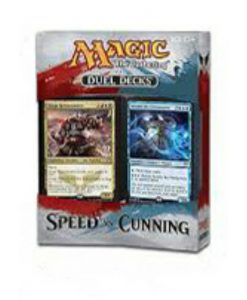 These ready-to-play decks showcase cards from across Magic history, including six cards from the new Khans of Tarkir â„¢ set and four cards with new artwork.

Who will prevail â€“ the swift or the sly ?

Racing across the blazing steppe, the wave of attackers crests the barren hills. Nothing can stop their reckless advance. These warriors live fast, fight hard, and strike terror into the hearts of those in their path. The scarred countryside seems abandoned. Then, suddenly, hidden fighters spring from ambush. The overconfident enemy recoils in surprise, outflanked and outsmarted. Who will prevail, the swift or the sly ?

Speed vs. Cunning is the next duel deck in the series, featuring the new M15 frames. With Zurgo Helmsmasher and Arcanis the Omnipotent each representing an aspect of the dragon, you get 2 ready-to-play 60-card decks, 2 deck boxes, 1 strategy insert and a learn-to-play guide.

Be the first to review “Magic: The Gathering – Speed Vs. Cunning Dual Decks ENGLISH” Cancel reply