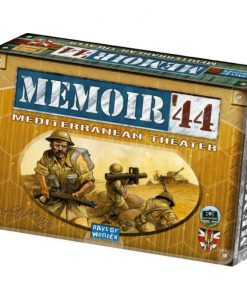 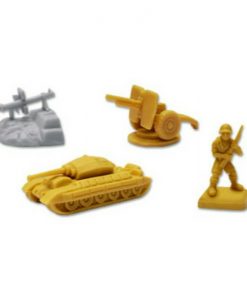 On the day war broke out, few nations imagined they would soon be forced to conduct land warfare outside of Europe. As a result, when the war reached North Africa, both men and machines were ill-prepared for the harsh demands of a desert campaign. But history is a testament to the caliber of leadership, ingenuity and resolve of those who fought under such harsh conditions. Thanks in part to its long-established presence in far-flung corners of the globe, no army would display these qualities better than the British Commonwealth Forces. Contents: A complete British Army set including: 42 British infantrymen, 24 Crusader tanks, 6 25-pounder guns and 3 anti-tank weapons, New rules including: the “Stiff Upper Lip” so common to the British Commonwealth Forces, the Motorized Divisions and “Artillery Bravery” of the Italian Royal Army, and a new class of embedded equipment pieces – the Special Weapon Assets!, 44 new double-sided Terrain tiles including: escarpments, ergs & ridges, coastlines, desert airstrips, HQ & supply tents, oasis, wadis…,10 Round Markers: British medals, minefield tokens and “Exit” markers, 4 Obstacles including: desert bunkers and roadblocks, 14 new Special Forces badges including: including the British SAS, Royal Engineers, and an assortment of Italian badges, 8 Historical Scenarios: from the tank disaster of Operation Battleaxe at Halfaya Pass to the relief of the Siege of Tobruk in Operation Crusader; 5 scenarios cover the drawn-out engagement of the Battle of Gazala! Age: 8 + Players: 2 + Playing time: 30 + minutes NOT A STAND-ALONE GAME. An original copy of the Memoir `44 game is required to play this expansion.