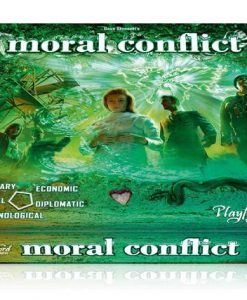 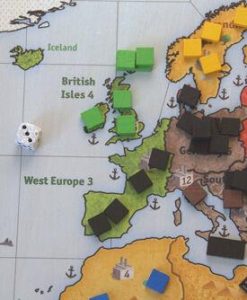 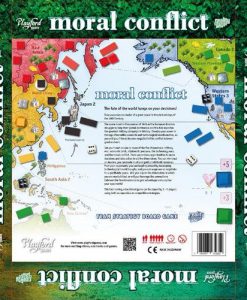 Moral Conflict is a team strategy game based on the Second World War scenario. Each player leads a power to develop his empire using military capability, economic assets, advance technology, diplomatic relations and moral conducts. The scene is summer 1941 as the European Empires struggle to keep their global dominance and the Axis launched the greatest military campaign in history. Players interact with one another in either co-operative or non-cooperative ways to attack, defend, trade, build, betray, negotiate, deceive or collaborate. The most unique features of this game is the path of the heart, where player’s heart, or moral conduct, becomes part of the game. Impact of each power’s moral action is clearly seen as players race to improve the social development of their powers. The Moral Conflict is a 2 – 5 player game from 90 minutes on an 85.5 x 50 cm board using 7 white 6 sided dice. There are over 400 playing pieces, including armies, fleets and convoys, fighting to control 42 lands and their oil resources around the world Moral Conflict board game for everyday players Fast moving strategy game 5 Dimensional : Mililtray War, Economic Crisis, Diplomatic Pressure,Technology Race & Moral Conflict www.playfordgames.com to see rule books, video presentions and more.. 20th Century civilisation theme